The Groninger Bodem Beweging (Translated it means ’the movement of earth or ground in Groningen’) is an association aiming to defend the interests of people who are directly or indirectly affected by gas extraction in the gas field in Groningen.​ The GBB has approximately 4,000 members and was founded on November 6, 2009. In 2019 we had our 10th anniversary and – alas –  we are still needed!

In the past years we have been fighting for:

We strongly believe that the residents of the province of Groningen are being wronged. To back up this statement, we have a list of several statements and facts:

The occurrence of induced (man-made) earthquakes was known and admitted by the authorities at the beginning of the nineties. Shortly after the largest earthquake on 17 August 2012, the State Supervisor of Mining advised reducing gas extraction to 12 billion cubic meters per year. Instead, the government raised the gas extraction levels. Only court decisions brought down the amounts extracted. Still, more heavy earthquakes followed before the government in 2018 finally decided to end gas extraction at the latest in 2030.

At the same slow pace, vulnerable, brick stone-built houses are being strengthened. 26,000 houses of a total of around 100.000 are potentially unsafe when a severe earthquake happens. Yet, after five years, only some 1,000 have been strengthened or demolished and rebuilt.

First and foremost the gas extraction must be ended as soon as possible! Furthermore, we want unsafe houses to be strengthened, damage to be compensated, the physical and mental health of the Groningers to be taken seriously, enable people who want to leave the area to sell their houses for a fair price, and, last but not least, accountability for those who were responsible.

Different studies show that the health of Groningers, in general, has been affected by the insecurity and uncertainty due to the earthquakes and their effects. This has a great impact on daily life. We want these scientific recommendations to be translated into effective measures. Adequate help and money have to be furnished by the central government.

Arrangements have to be made for residents who want to leave the area but suffer great financial damage when selling their houses. A fair buy-out system has to be set up.

Shell / Exxon Mobil and politicians are responsible for the hazardous situation of the people in Groningen today. The recently started parliamentary inquiry has to produce the most complete picture about the entire history of gas extraction and the decisions made during the past six decades that led to the current situation.

The GBB achieves this

What we have achieved

One of our goals was to be heard! In the past ten years, we made it clear, nationally and internationally​, that there is a crisis in slow motion going on in Groningen. We have achieved that Groningen is featured in the media regularly.

What does it take?​

To achieve what we want, we need the support of a lot of people!​ All Groningers!!! With the support of a growing number of people, we grow bigger. And when we do, we gain more counterpower and more work can be done.

We do this to achieve a Groningen where it ​is safe to live and work and where we can build a future for ​our children​! 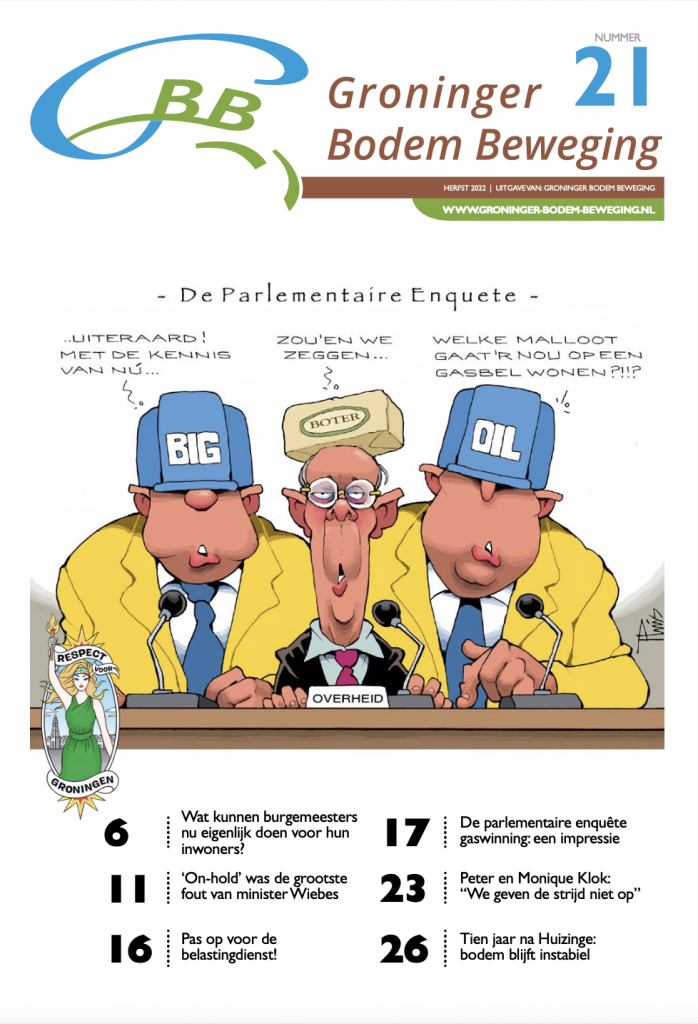